Dallas is the ninth largest city in the U.S. and third in Texas. It is the center of telecommunications, banking, and transportation industries. In 2011, Dallas was rated as an Alpha- world city. The city is home to approximately 1.2 million people, and the metropolitan area of nearly 7 million. For every 100 females age of 18 and over, there were 100.5 males. Below you will find some appealing ideas for dating in Dallas.

Dinning and Dating in Dallas

Dallas with more restaurants per capita than NYC, is the perfect place for dating for any lovers of good food. Many great chefs struggled for Dallas to make it permanently inscribed in the country's culinary map. Prior to the arrival of American settlers, Dallas belonged to the Mexicans. Therefore, not surprisingly, the impact of Mexican tradition on cuisine served today in the city is apparently huge. Dallas is famous for barbecue (Sweet Georgia Brown Bar-B-Que, Mike Anderson's BBQ House, Pecan Lodge), Mexican, and Tex-Mex cuisine (Lalo's Fine Mexican Cuisine, Mesa, Pepe's & Mito's Mexican Café) with its emphasis on fajitas, chili, and the meat stew. The city is also well known for frozen margarita. Other food enthusiasts will also find something inspiring for themselves. It’s worth going out to The French Room, Lucia, or Fujiyama Sushi & Yakitori Bar. 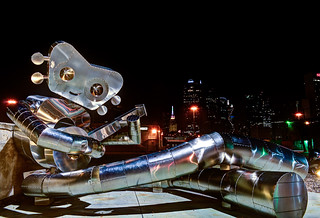 The Arts District, located in the north side of Downtown, is home to several interesting arts venues which, in our opinion, can be a perfect idea for an interesting date in Dallas. Every fan of symphonic music should visit the Morton H. Meyerson Symphony Center, home to the Dallas Symphony Orchestra and Dallas Symphony Wind. Another attractive venues are those included in the AT&T Performing Arts Center: Winspear Opera House, Texas Ballet Theater, Dallas Black Dance Theatre, and City Performance Hall, to name just a few. Downtown is also home to some world-class museums. For sure worth visiting are: Nasher Sculpture Center, The Trammell & Margaret Crow Collection of Asian Art, and Meadows Museum (in fact located not far north of Downtown).

Deep Ellum located east Downtown, was jazz and blues hot spot in 1920s and 1930s, where many well-known artists such as Blind Lemon Jefferson, Huddie "Lead Belly" Ledbetter, and Robert Johnson performed. Today it is one of main arts and entertainment venues. It is home to artists who live in lofts and operate in studios throughout the district.

Dallas is certainly one of the most cosmopolitan places throughout the United States, with many options for a great date. The variety of clubs will satisfy even the most demanding daters. There are both large and loud such as Plush, Station 4, Teddy's Room and multi-level clubs (for example Zouk) that often host great rock bands and great DJs. Those who prefer a moment of relaxation having a drink to nightlife in loud clubs, will not have any problem finding a place for their dream date, because the city has an impressive bar scene. Many of them serve also delicious cuisine. These venues will include The Flying Saucer, Crú – A Wine Bar, and Primo's. If you would like to spend time in a more cozy atmosphere, away from the noisy pubs and clubs, you can choose a date at Rattlesnake Bar or Dragonfly At Hotel Zaza.